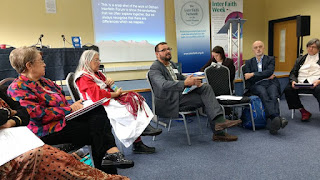 Yet seeking commonality seems to be pervasive. Seeking and finding what is the same in the world religions, however, is not a guaranteed road to harmony – there is a danger that choosing this route will lead to too much that cannot be said for fear of upsetting the balance. There is the danger of feeling the need to carefully steer a rather narrow path. I feel that the broader path of openness, respect, and appreciation of difference is preferable, though not always easy. I recognise that I do sometimes avoid being clear that Buddhism is an atheistic, or non-theistic religion, because I know that for people I care about, who believe in a creator god, this is not easy to hear or understand.
Knowing that our faiths or religions are different—possibly radically different—yet finding that we are people of kind heart; discovering that interfaith colleagues also cultivate patience and openness; recognising interfaith friends can like one another and enjoy each other’s company – this is the opportunity offered by Interfaith interaction.
Friendly and respectful interaction, and intermixing of people of different religions—or of no religion—can ripple out into the community. When there is no fear of difference, then there is nothing to hate. Interfaith harmony and respect can help to create a society that is tolerant. Respect for difference, appreciation of difference, the enjoyment of difference – this is the value of interfaith interaction. Let us celebrate that our freedom to be different is the key to a healthy society.