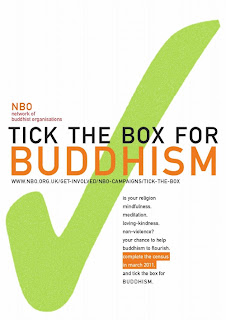 So, if you have been inspired by, or benefited from, Buddhism through meditation, mindfulness practice, or attendance at a Buddhist group or retreat, please indicate your support by ticking the Buddhist box on the 2011 census. And we want to encourage all Buddhists to ask their friends, in Buddhist temples, monasteries and mindfulness centres,  and other sympathetic groups, and in internet social networking sites and forums, to do the same.

Email ThisBlogThis!Share to TwitterShare to FacebookShare to Pinterest
Labels: Network of Buddhist Organisations